Hi,
not sure if this comm is still alive but I had to try anyway.

This line on one side appeared out of nowhere and it is bugging me.
How can I get rid of it without changing anything else? I want the lines between "comment", "share" etc. to stay. 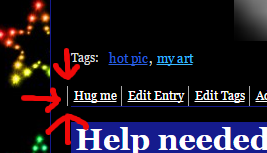 I'm really hoping that someone can help with my custom css, which I've been using for four or five years now.

Unfortunately, recent changes to LJ's backend have thrown up a quirk in relation to entries on my friends page (http://alyse.livejournal.com/friends) (and from poking around other users of this custom CSS (see link below), for all entries in communities, both on the community's main page and on their equivalent of the 'friends page'). Every entry on my friends page is showing not just the name of the person posting the entry (and the community, if relevant) but also my own username. 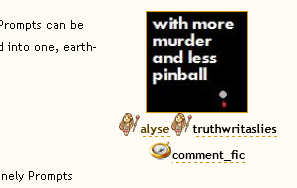 I have a permanent account, and the theme I'm using is based on mixit. My custom layer, with all of the css code I've added, can be found here:

The original CSS (before I changed colour schemes, added my own header image and some other tweaks) can be found here: http://thefulcrum.livejournal.com/7877.html. Unfortunately, no entries appear to have been made to that journal since 2011, so I suspect the original creator has abandoned LJ.

I haven't - to my knowledge - added anything to how users display other than replacing the user icon image. However, even taking that code out of the CSS override at the end doesn't fix the issue.

I've asked Support, but they're declaiming all knowledge and state that since I'm using custom CSS they can't help, and they won't even tell me what they might have changed in their code that I could even start looking for in the CSS. They may have a point about the CSS, though, as defaulting back to the mixit theme base doesn't cause the issue. But I'm at a loss, and I'm really hoping that some kind person - who knows more about how LJ code things - can help.

The full CSS code in a text box behind the cut, as I suspect it would be easier to grab and read from that than trying to read it on the user theme layer I linked.

Can anyone help me edit my code? I'm trying to move the nav links and title/subtitle to different positions on my header. Is there a code I could use where I could adjust the number settings till I have each thing in the position I want. I'm still pretty new to CSS so I'm kind of lost here.

I'm using google chrome, the expressive layout, have a plus account, and am posting from the same journal I need help fixing.

i searched for a faq or help page mentioning it, goggled like mad, didn't find it...
though it's such a basic question ~

is it possible at all to add OWN classes/IDs?? ! IN THE CSS PANEL + ENTRY !
without to touch the layer - only HTML in the entry (i have 1 recurrent div or table i'd like to customize) and a corresponding css block in my sheet. because if i have to write the style inline for every div/table in the entry (a faq), it will fill my entry allowed space in no time, and give me a headache looking at its code.
( Collapse )

Can anybody help me with this?

I had no problem whatsoever a while ago but latest LJ idiotic unwanted changes managed to create this problem for me.

It used to be only one layer of background picture, icon and text (username and community name or just the username) with my customized rose userheads underneath, now it looks like this pile of garbage.

i noticed this yesterday, but it might have happened a while ago - i just didn't see it.
obviously, LJ (recently?) does resize images when they don't have BOTH width & height specified..?

as far as i know, you can't override LJ css with user css so your entry html is respected again - but maybe i'm wrong?

Okay, so I'm trying to help a friend customize 'Icicles.' I can't seem to get the header image to center.

We'd like the header image centered and the text below the header, not on it.

What are we doing wrong?!?

Is there a way to get rid of this thing? It keeps covering text which annoys me to no end.

Making it "semi-transparent" just makes my eyes and head hurt.

I am almost done with my layout. Except one thing. I cannot find the code that changes the Previous/Next links to the same color as my layout links. Can anyone help?

Hello! I don't know if this has been answered yet, I did a bit of looking but wasn't able to find it...

I'm looking to change the background color of my posts/the inner box area. The main page background is fine, I just want the inner portion to be black or dark grey, with white text. I love reading off my phone at night and I'm sure a lot of other people do as well, so I'm hoping changing my journal to a more "night mode" look would make reading a little easier.

I have a paid account, and I'm using Minimal Blue.

This is all the CSS I'm using right now, for the header and such: